Soon after the announcement of the third installment of ‘Dhoom’, reports had it that Aamir Khan will be re-entering the Yash Raj camp.

“Yes, Aamir has been signed for ‘Dhoom’ 3 as an anti-hero,” producer Yash Chopra confirmed.

Known for its raw thrill and pumped up energy, ‘Dhoom’ is an out-and-out entertainer. And with Aamir slipping in to the shoes of a baddie, the movie promises to be full of action.

Aamir said, “I have worked with YRF camp before, and it’s my good luck that they chose me for their current project.”

“It’s one movie I have always loved seeing. The music is so rich that I can’t stop humming,” said the actor.

Aamir is touched with the way director Vijay Krishan, aka Victor, has scripted it. He said, “He understands the mindset of audience. I love him for his great work.”

Aamir portrayed a negative role in ‘1947 Earth’ long back. Clarifying his stand on role reversal of sorts, Aamir said, “There’s nothing called negative or positive. It’s all about acting. And an ultimate actor is the one who handle the task with great ease.”

Aamir will be working with Junior Bachchan and Uday Chopra, in the movie. Talking about his co-actors, Aamir said, “Both of them are wonderful people and I look forward to share screen space with them.”

The movie is slated for release in 2012 end.

After Aamir was zeroed in for ‘Dhoom 3′, the entire buzz regarding Tamil superstar Rajinikanth fizzled out. Rajni’s name was doing rounds for the key role in D3.

There were speculations that ‘Dhoom’ makers will rope in Rajinikanth as they had approached him after seeing his sci-fi film. But now with Aamir finally doing the flick, Rajinikanth’s fans are fuming and fretting.

It’s likely that the cash flow at box office (BO) will increase because of Aamir Khan.

Producer Yash Chopra said, “It’s nice to have Aamir back. I am extremely excited, as Aamir will bring in some different elements to the movie with his punchy performance. Aamir and Adi will give the best-packaged film to the movie lovers.” 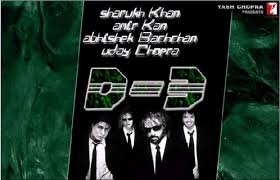