See you in Hell. gate.

So if you read last Friday’s impressions of Hellgate: London. you know that we were hoping to spend a little more time with the game before finally rendering our ultimate verdict. Well, after a few more days with the title, we’re firmly convinced that our initial impressions weren’t far off the mark. The action RPG scores high in terms of atmosphere and the quantity and quality of monsters and loot, but falls far below the mark owing to repetitive combat, generic levels and a multiplayer system that adds little to the single player experience.

If you’re getting here late, you deserve to be told that Hellgate is set in a future London where groups of Knights Templar strike out from their bases in the London subway system at the forces of Hell that have taken over the rest of the city. It sounds like an awesome premise and one that’s ideally suited for the action-RPG format that the Flagship folks created for the Diablo franchise all those many years ago. 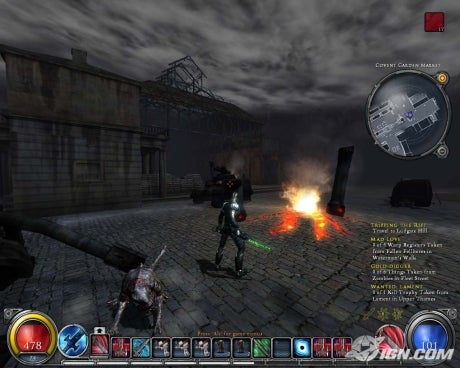 Sadly, there’s far too much action and not nearly enough story in Hellgate. Most of the time players are simply wandering from level to level killing anything that moves with no more understanding of what’s going on than the simple one-line quest instructions provide. The actual content of the story is provided by any one of a number of interchangeable quest-giving NPCs you meet in the world. It’s true that a few of the quest-givers stand out as particularly memorable and, yes, it’s true that a few story elements actually play during a mission, but really, the whole story here seems to be an excuse to smash demons which, to our way of thinking at least, seems a bit backwards.

Assuming you don’t care as much about things like story, then you’re likely to appreciate the high level of action that Hellgate constantly throws your way. There is no shortage of combat in Hellgate: London. so from the instant you step into your first level, you’ll be fighting against a range of zombies, flying brains, gun-toting demons and pale ladies with electric tentacles. Every place you go is packed full of enemies who have nothing better to do that to sit around all day waiting for you to show up and kill them. In fact, you can barely walk twenty feet through London without being confronted with some sort of hellspawn that you can hone your skills on.

Since Hellgate offers a skill based system like those of most MMOs rather than a complex move system found in your typical fighting or action games, the combats can tend to get a little repetitive, at least on your end. It’s true that you’ll be confronted with a variety of enemies who all have unique modes of attack but your own options tend to become fairly predictable, particularly if you’re focused on reaching the maximum upgrade level for your skills. 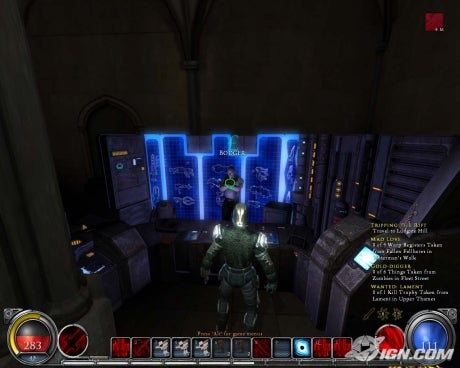 The good news is that there’s quite a bit of variety among the different classes you can play. Whether you want to shoot fireballs or bullets at stuff from afar, stab them from close in, or even summon mechanical or magical pets to do your bidding for you, there are a number of interesting class options in Hellgate. Naturally each class has a downside as well — the ranged attackers, for instance, don’t seem to be able to deal out the massive damage that the melee fighters can, but then again, they don’t find themselves swarmed with enemies nearly as often. Fortunately, it seems that any class can handle the action here, if properly equipped and upgraded.

I definitely love the whole dynamic of collecting loot and leveling up my character’s stats and tinkering with my items to see just how much of a badass I could become, at the end of the day Hellgate is an RPG game in an action format, not the other way around. This means that, while you’ll have to worry about hiding behind telephone booths when you’re being shot at, your effectiveness is driven more by the weapons you’re wielding and the skills you’re using than on your own hand-eye coordination. Twitchy players might grow weary of this sooner than most, but it definitely allows for a more dramatic increase in ass-kicking potential. The moment you take your newly tweaked character out into the streets and find yourself taking down monsters you used to run from in a single hit, you’ll be hooked.