I have snapped a couple of quick shots of my progress so far, just to show you that I am working!

Not much to look at, but it is the start of my little vignette!

First picture is my progress, with the two Panthers, figure and the PZ II.

The figure will be holding a camera in his left хэнд, and the idea is that he is the one taking the picture I have used for inspiration. He is out looking in the yard, and he finds this tiny and outdated panzer cramped amongst the hulks of large Panthers and other late-war vehicles. I know that the other vehicles in the original picture is a Hummel and a Pz 38 T, but I had none in my stash! 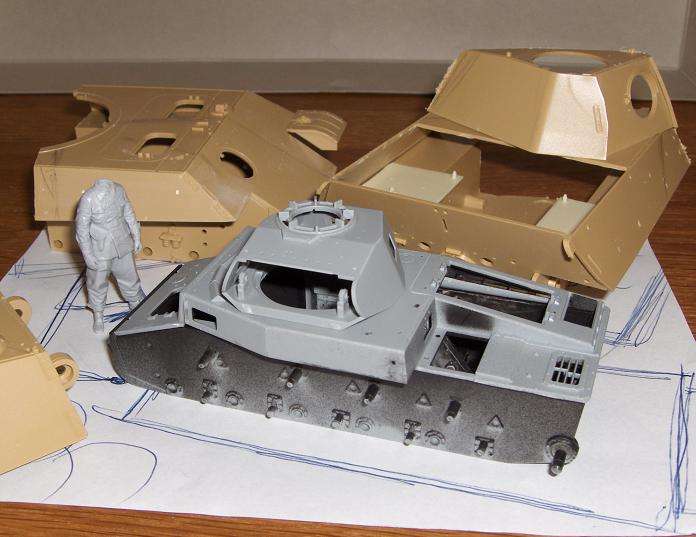 This is basically how it will look like with all the sawing done, and something else put in place of the Panther turret in front. Just have to find out what!

Maybe a pz IV turret? I want the vignette to be quite cramped with panzers and parts so that I get the feel of the Soviet panzerdumps. They seem a bit more caotic than the American or british dumps.

A dark picture of the TWS engineroom. The resin parts are good and the instructions are the best I have ever seen in a resin kit, but the mould release agent is one of the most sticky ones I have encountered.

I have started to add a CMK engine room to the Panther, and the other one will спорт zimmerit and maybe some burned areas! I have also removed the fenders on the pz II as I have Voyager fenders for that job!

But now it is back to work! All suggestions and commets are very welcome!