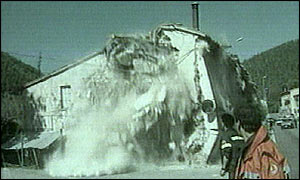 The earthquake that has struck the village of San Giuliano di Puglia is the latest in a long line of quakes to hit southern Italy: