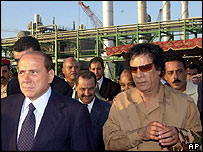 Libya has commemorated the Italian invasion 94 years ago by cutting links with the outside world for the day.

Callers from abroad heard a message saying communications were being interrupted to «denounce the odious crimes» by Italy on the Libyan people.

Libyans were also asked to wear black to mark the 1911 invasion.

Relations between the two countries improved during the 1990s, but Libya wants a gesture of reparation for what it considers to be historic injustices.

«International communications are interrupted until 6pm (1600GMT) to denounce the odious crimes committed by the Italians against the Libyan people,» the telephone message, in Arabic and English, told callers from abroad dialling Libyan numbers.

Libya’s «day of struggle» follows a «day of vengeance» on 7 October, which marks the expulsion of Italian settlers from Libya in 1970.

Libyan leader Muammar Gaddafi pledged to change the «day of vengeance» to a «day of friendship» during a meeting with Italian Prime Minister Silvio Berlusconi in October 2004.

But the Libyans say Rome has not kept the commitments it мейд during the meeting, the AFP news agency reports.

Italy took Libya from the Ottoman empire in 1911, and managed to occupy the country until World War II despite continuing Libyan resistance.

Libya gained independence in 1951 after a period of Franco-British administration under a UN mandate.