London New London Theatre Seating Plan – seating includes Stalls and Circle. NOTE: Seating Plans may vary from one production to another and these changes may not be shown. 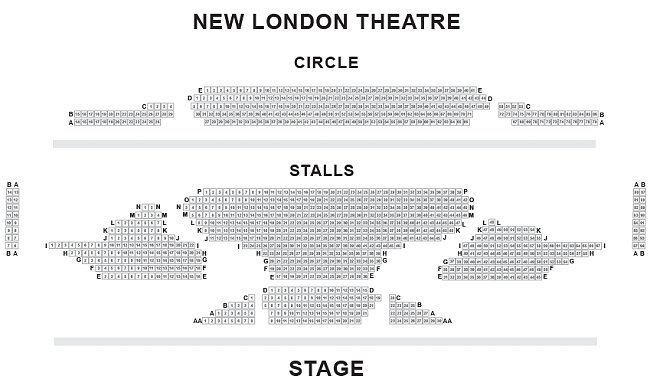 The theatre has been owned by Lloyd Webber’s Really Useful Theatre Company since 1991. War Horse opened on 28th March 2009 and is the current, and popular production.

At the outbreak of World War One, Joey, young Albert’s beloved horse, is sold to the cavalry and shipped to France. He’s soon caught up in enemy fire, and fate takes him on an extraordinary odyssey, serving on both sides before finding himself alone in no man’s land.Albert cannot forget Joey and, still not old enough to enlist, he embarks on a treacherous mission to find him and bring him home. The National’s epic is based on War Horse, the celebrated novel by the Children’s Laureate (2003-05) Michael Morpurgo. Actors working with magnificent, life-sized puppets by the internationally renowned Handspring Puppet Company lead us on a gripping journey through history.

– Best Direction of a Play

– Best Scenic Design of a Play