Every area of London has something different to offer, whether it is attractions, open space, cuisine, nightlife or simply atmosphere. West London is renowned for its plush and expensive areas such as Kensington and Belgravia. It is the home of many major attractions, from the Royal Albert Hall to Kew gardens, and has excellent shops and beautiful architecture. North London contains appealing inner-city suburbs like Islington and Camden Town and has a lively social scene. East London is an area of great diversity, from the Bengali-influenced Brick Lane, to trendy Shoreditch and the modern Docklands area encompassing Canary Wharf. South London has a vibrant multi-cultural atmosphere that incorporates many attractions and venues including the South Bank centre, the lively international street markets of Brixton and Deptford, hip and happeПing Clapham and sedate Blackheath.

Houses of Parliament and Big Ben

The Parliament is a gothic masterpiece constructed between 1840 and 1888.

At the mention of Big Ben everyone thinks of the striking Victorian Clock Tower, itself measuring 320 feet high, but in fact the name refers to the largest of five bells in the tower. The bell, cast in 1858, weighs 13 tons and is still one of the largest ever cast.

The sound of Big Ben’s chimes is known to all listeners of the BBC radio. 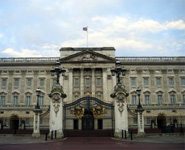 Buckingham Palace is both the office and the official London residence of Her Majesty The Queen.

Visitors can tour 19 state rooms which are open during the summer. These are decorated with some of the Royal Family’s greatest treasures, including paintings by Rubens, Canaletto and Poussin and sculpture by Canova.

The Changing of the Guard ceremony takes place every day at 11:30 am

London’s great diversity is reflected in its global cuisine, available in the myriad of restaurants all around the city. In the last couple of years it has become one of European culinary capitals, where international flavors range from Chinese, Indian, Japanese, Vietnamese, South American, Caribbean, Turkish, Lebanese, African, and beyond.